The Run Hard Marathon is in its second year,  having been miraculously thrown together last year by Jesse Harmon and company to rescue the Columbia Marathon, which itself had been resurrected in 2012. The original Columbia Marathon ran from the 80’s through about 2000 if my sources are correct. Apparently we have trouble keeping these things going in the Capital City.

Perhaps one reason is our location. Columbia was strategically built on a HILL, in an area called the SandHILLS, so you might get the idea that this race is not flat. And you’d be right. It’s unapologetically brutal, and a double looper to boot, so you get to experience it all twice. To be fair, the race embraces its hilliness and makes no bones about it being challenging. I saw they were using “Gervais : come hill or high water” as a promo slogan on their training shirts. #truth.

For me, I think its important to support our city’s marathon, so I always participate. But not in the full. I pretty much hate marathons. True, one of my greatest running achievements happened at Kiawah last year, but I had to walk in the shadow of the valley of death to do it. You have to do insane mileage to train, carefully plan out hydration and nutrition, taper accordingly, etc. I’ll take a  good 19 minute all out headless-chicken 5k any day over all of that.

So I do the relay. It started in 2013, when I got Angel Manuel, Derek Gomez , Darrell “the Code” Brown and myself together to form a supergroup of Columbia runners born in 1975. We went head to head with the fastest girls in Columbia (Shannon Iriel, Amy McDonough, Theresa Penney and Kenzie Riddle) and narrowly pulled out the victory. In 2014,  we came back with Ken “the Pale Beast” Vowles,  Tyler “Trophy” McGaha and Spence “the Young Buck” Griffin in a slightly slower but fabulously nicknamed version of Team Blue Shoes. We were still all set to be repeat champs until Randy Finn called Coach B at the Expo and fielded a thrown-together all-beast team (with Mike Hedgecock  and Steven Johnson) who promptly whipped our tails the next day. Working the CRC table at the expo, I saw all of this unfold right in front of my eyes. Like taking candy from a baby. It was tragic.

This year, there was talk of even more competition. I lost Trophy and Code, and even Ken was iffy with his gimp ankle. We decided to regroup under Team Utopia , picking up Drew Williams and our ultimate ringer, Justin Bishop. Strictly was at it again, this time under the masterminding of Larry Jourdain. He had not one but 2 teams entered, one that was all grandmaster beasts  (the old plow mules) and one that was a bunch of young guys that he was being secretive about. Ruh roh. There was a last second scratch on the plow mule team, so spring chicken Jeff Brandenburg took the spot. He was doing the oddest of double dips – finishing the 5k in time to do leg 3 of the relay. All of this to secure yet more masters points. As a restatement of the inherently obvious, he is one sick bastard.

Although I think registration was down some from last year, I was pleased to see most of the Columbia running community out for this one – either racing, pacing or volunteering. It was pretty cold (30’s) but clear and with little wind, so pretty close to ideal conditions. I did a mini warmup with Trophy and Jamey and I was ready to go . For some reason, I get way more nervous before relays than individual races. Its one thing when you suck and its all on you, and another having to share the suckage with three other people. Being the team organizer,  and resident attention whore, I gave myself the first leg – 5 miles from the state house to Brennan Elementary.

So I went out hard. Way hard… apparently taking the race name a little too seriously. The first half mile is a nice little tour around the state house and main street past Hunter Gatherer, Sandy’s and whatever resort-like dorm they put up in place of my beloved freshman towers (kids these days). Pretty flat. I’m a little confused because I don’t see anyone else with a relay baton. All I do see are super fit dudes with singlets that appear perplexed by this Clydesdalian Sasquatch in their midst. They are already chatting about sub 2:50 marathons while I’m panting like a rabid gorilla in heat beside them.  Ok , this is good, lets shoot for that 6:20ish pace you had planned. We then take a left and down the Blossom Street hill that is the bane of every Gov Cup racer’s existence. It feels great to just let gravity work and ride on down. Mile one comes back at Maxcy Gregg Park – 5:59. Oopsie. Too much coffee, I guess. This is going to hurt.

Sure enough,  1.25 miles in and we hit 5 points and turn right on Saluda. Saluda is the first of the many mountains on this course and man does it suck.  You think you are doing OK until the last little bit at the top, where every last molecule of oxygen gets wrung out of your lungs and you’re gasping for dear life. Even singlet guys drop back on this one. I hit mile 2 at the summit in 6:40 and I’m actually relieved, because it felt like I was barely moving. There’s a sharp downhill right away on Heyward, which doesn’t help me catch my breath since I’m trying to keep from flopping all over the place on the way down. What’s worse is a sharp incline right away after you pass Harden St, which beats you down a little more. I don’t think I caught my breath again until about King Street, and I try to settle in and keep up with Jason Dimery. Jason is way faster than me, but I figure he’s at least doing the half or maybe the full, and I’ve only got another 2.5 miles. Things roll pretty steadily through Shandon. I didn’t look at my splits, but mile 3 and 4 were both in the 6:20’s, my actual target pace.

I started noticing that me and this older guy in a red singlet kept going back and forth. I wondered if he might be a relayer, since I think he had a Strictly singlet, but I didn’t him carrying one. Having run many a relay, I do know some people hide the batons, but the thing I was carrying seemed to big to stuff anywhere.  At least I hoped.  A few times I thought I lost him, but then he would pass me on a downhill, my inexplicable weakness. Finally we hit Kilbourne and I hear the mile 4 beep on my Garmin. Time for the gloves to come off.

Unfortunately we were so far from Devine St that Kilbourne actually has a nasty rise to climb first, which didn’t time well with my sudden surge. Oh well, this was going to hurt – I knew I was going to pay for that sub 6 mile eventually. While downhills may be my weakness, spelunking the dark cavernous recesses of the pain cave is my absolute specialty. Especially when it may involve relay roadkill. By the time I get to Devine St I am pretty much striding out and sucking wind like its no tomorrow, betting all my chips I can coast down the long home stretch on Devereaux.  I pull up beside Toby Selix, i.e. the new 35-39 party crasher, and absolute beast. He’s cruising along at low 6 pace and making conversation, while I’m blowing snot and feeling the grip of imminent death. We hit Devereaux and I start redlining it. Selix is doing the half but still rides along in my wake the whole way down.  I cross Beltline and take another few pain cave steps just to take down Dimery in the last 100 meters. But I dont see Drew…WTF??? I almost stop to look for him but luckily someone yells at me to turn the corner and thank God he’s there. I hit the relay area a few seconds over 32 minutes – Garmin had 5.1 miles and 6:07 last full mile. I barely have a chance to catch my breath before red singlet guy comes blasting in behind me and somehow removes a baton from some unseen orifice to hand off to their No. 2. Man, these plow mules are crafty. Larry is there at the zone to confirm that was his team.

Relays are always somewhat mysterious, since you never get to see the whole race unfold. From what I heard, the Strictly open team was just ridiculous and came through at like 28 minutes at the first exchange. They even wore “elite” jerseys and had a cakewalk of a win in 2:29. Drew, our number 2, was fighting a toe injury and was in some serious pain the last 5 miles (he had the first  8 mile leg) but soldiered through. The Plow Mules overtook the lead somewhere in leg 2. A fresh Pale Beast  and a post 5k Brandenburg probably was a wash, and then Bishop was too strong in the last 8 miles, overtaking Larry in the anchor leg.  We finished 2nd in 2:47, with the Old Plow Mules in 3rd in 2:53. Fourth place was 3:40ish and the women’s win was over 4 hours, so definitely a trophy hunt opportunity for the coed or womens teams next year.

Be sure to check out  the “Triathlon Joe” facebook site for his recap of the full. Joe paced with me and kept me entertained in the first half of Kiawah and is an ex-Columbian living in the Atlanta area.

Results from the CRC newsletter: 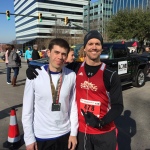