The MGC Long Run is now in its third year and has grown to be one of the biggest winter races in Columbia, as well as one of its few 15ks. This year they received RRCA official state championship status for the 15k, ramping up the elite factor even more. The 9.3 mile course is really cool, taking you by the State House and over the river on two different bridges, ending with a tough Blossom St climb and finish on Lady street .

But, as any trophy hunter knows, ALWAYS RUN THE UNDERCARD.  And there it was, the 5k, just sitting there.  Sure there was the “Not so Long run 5k” moniker that basically cried out that you were a wuss for choosing it, but pride is never factor when it comes to the pursuit of shiny metal trinkets. What’s more, I did the 15k last year. Everyone remembers the brutal finish, but I had stored away a memory from last year’s race – the first 3 miles were beautifully flat. These first three miles were also the entire 5k route.  I was in.

The 5k is 30 minutes after the 15k start, so by the time I show up the place is teeming with beasts for the bigger race. The last two years they brought out a Kenyan (Kimutai Cheruiyot )and Michael Banks to the race and the 15k state record was broken by Cheruiyot the first year (and barely missed by Banks in year two). I didn’t recognize anyone capable of those performances but there were some other studs in attendance like Matt Shock and Orinthal Striggles. Anton “The Method” Bodourov was making a rare appearance to crush anyone else’s Masters hopes. Joy Miller, Heather Costello and SR’s Erins – Miller and Suttman – were on hand to make a fast women’s race.

I took some pics of the 15k start and about froze my fingers off just clicking the iphone. Freaking cold. Hopefully that removed most of the competition, though I was wondering if Brandenburg might show up, or maybe Bedenbaugh, to try and steal my masters glory.

The 15k started a little late so I was wondering if the 5k might be backed up too. Luckily Selwyn caught me heading out for a warmup and said it was going to start in 7 minutes. My worst “racemare” is missing the start, so I made sure to circle back around.

The start has a track like half mile loop that brings you back towards the finish. With the flat streets and bracing cold, I was going out hard from the get go. I’ve learned the only way to run a fast 5k is to go out hard and hang on. Basically jump in the pain cave and make things cozy, because you’re going to be there the whole damn time. But at first it wasn’t so bad. Lots of crowd support and energy. I was bummed to see Shawanna at the half mile mark looking dejected – I think she missed the start.  After the half mile lap is a long stretch on Marion street. I feel a familiar whipping on my ankles and I cannot freaking believe my shoe has come untied. Three hundred races in You’d think I’d have mastered the task. But no way was I burning this trophy hunt to stop. I am wondering  at this time a) where the hell is Code and Will Brumbach? And b) Why am I sucking so much wind already?  Fortunately Strictly had a mile clock and  as I approached it was still in the fives.  Questions answered.  I passed at about 6:07. Since my injury recovery, I’ve been doing 6:20’s so this was more than just a little speedy. Oh well, the chips are already pushed in.

Mile 2 is kind of a blur. I’m hating life and it feels like I’m slowing down. MC Cox is giving me a beat down and Drew is still up ahead pretty far. I recognize a lot of the course from Bunny Hop, another gloriously flat race. My Garmin buzzes and says my recovery from my last run is “FAIR”. Really, Garmin? I was doing 4 nine minute miles yesterday – I’m pretty sure this is harder than that. Gregg St has a little rise and it’s like a punch to the stomach. I am about toast and starting to mentally struggle when my Garmin beeps again and gives me back an identical 6:07. Wow, I guess that’s why I’m dying. But it’s a big mental boost to still be right on 19 flat pace this far in.

Any hopes of seeing the 18’s however, kind of go out the window on Pickens. This long straightaway lasts forever and is ever so slightly uphill. I’m in a world of hurt. The only thing keeping me going is besting that 19:29 from last weekend and the fact I’m just starting to reel in Drew again. In my death struggle, I see Lady street up ahead and figure its straight to the finish from there. I start to mount whatever kick I can muster but then I see MC Cox go straight. Oh crap, I really should have memorized this course better. Finally we turn left onto Gervais and I know we are getting close. Afterburners go on as my lungs are crying out for mercy. Somehow I catch Drew on Gervais and don’t have any air for snarky comments.  I see a guy up ahead as we turn down Sumter towards Lady and I can’t tell for sure if he’s an age grouper.  I finally catch this guy on Lady and I can see the finish way up ahead. Somehow I find another gear and come barreling down the street , spelunking areas of the pain cave I didn’t know existed. I thought I might be flirting with 18’s but the clock had already turned over. Threw in one last burst to hit the line just under 19:20. 19:19 officially. Fastest 5k since last spring and first masters!

In the 15k, Greenville’s Brett Morley took the win in 48 minutes and change. Matt Shock took second, with Rashad Striggles 4th. On the women’s side, Joy Miller took the win in 56:31 with Heather Costello, Erin Miller and Erin Suttman taking the next 3 spots, all under an hour. Linn Hall and Anton Bodourov captured masters wins.

15k age groupers: Ashley Sears claimed 1st while Kimberly Hardin took 3rd in the 30-34. Michael Nance, luke Godwin and Rob Yerger swept the 35-39 men. Kristin Cattieu won 2nd among the women. Phil Midden and Toby Selix went 1-2 in the 40-44, with Rebecca West taking 2nd among the women.Whitney Keen won the 45-49, while Ryan Fleischer edged out Randy Hrechko for 2nd. In the 50-54 women, Chantal Faure took the win with Marlena Crovatt-Badwell 3rd.  Jay Hammond, Phil Togneri and Alan Humphries claimed the 50-54 men. Alsena Edwards and Carol Wallace went 1-3 in the 55-59 women. Robbie McClendon and Mike Compton fought it out for the top 2 in the 60-64.Mary Howk won the 60-64 women in sub 8 pace, 15 minutes ahead of 2nd. Karen Kramer took 3rd. John Houser was 2nd in the 65-69 men, while Patti Lowden and Brigitte Smith claimed the women’s division. Ron Hagell and Jesse Smarr won the 70+. 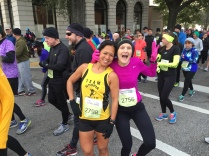 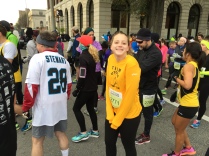