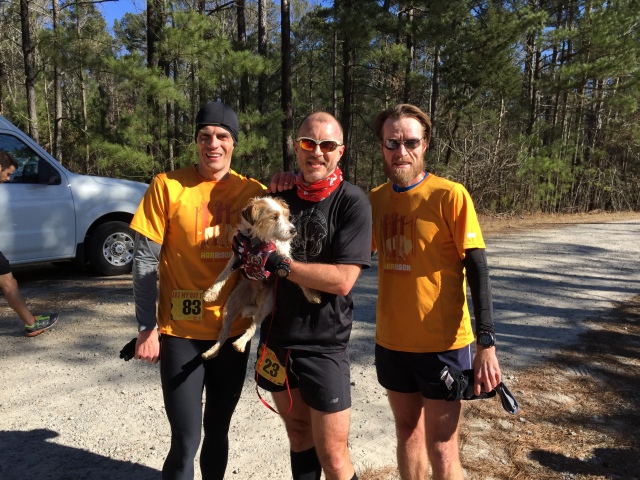 Make my Day is a 12k and 5k put on by Half Moon Outfitters to support Harbison State Forest, now in its 7th year. Since I generally suck on the trails, I didn’t show up at this race until 2013. I’ve been back every year since because of the awesome swag Half Moon throws into this race and its a rare chance to go head to head with some of the Harbison Trail Runner guys, on their home course.

As I’ve stated before, I have a love/hate relationship with the trails. I love my Sesqui, only a half mile from my house and full of soft, cushy sand. It’s a great break from the beatdown of the roads and provides a great workout. Plus, its always nice not to have to almost be run over by texting soccer moms in giant SUVs. That being said, racing on trails is a whole other ballgame. Especially anything short. If you’ve never had the joy of a frantic bear chase for your life through the woods, try a trail 5k. I think other people share my opinion since most trail races go long. The long races mess with my head too, since I can’t get a handle on pace and effort, and I either leave some on the course or end up a crumpled sweaty heap at the finish.

Last year I ran a pretty strong race pacing off other people, so I figured I’d do the same this time. The fitness has been slowly getting better with the steady diet of 40-50 miles a week in prep for Boston. The 19:19 5k last week was the best since last spring, when I hitched aboard the injury train and couldn’t get off.

Rolling into Harbison about an hour ahead of time, I was thankful there were only a handful of people there. It seems every race held in this place cheaps out on the bathrooms, so its always a crap shoot (see what I did there) what you’re going to get. Luckily there were at least 2 portapotties plus the one scary Harbison bathroom. If you’ve never used a portapotty when its 28 degrees, I can’t say I recommend it. But at least there wasn’t a line… yet.

I only did about a mile warmup – despite picking up my packet the day before, I got sucked into the smartwool booth where they offer you free socks…if you post a pic of yourself on social media with their hashtag. I sold out like Peyton Manning to get my precious little high end footies. Oh well, its not like I’m not a facebook whore already.

I wussed out on fellow Team Utopia Boston trainees Michael Nance and Derek Gomez’ course preview run before the race but managed to run into them as they finished. They were incorporating the race as a tempo section of their long run, which sounded good, except for the fact that I become a crazed animal whenever I pin that bib on. No way could I go easy on the race. Derek passed on a key, crucial bit of info though – the course was at least 8.5 miles. There had been plenty of info about the course being detoured due to trail conditions and being a little longer, but I had no idea it would be another mile and change.

The start is a gradual climb on a wide open gravel road, which I took way too hard last year and died. I was a little more judicious this time and held back my Tasmanian devil starting tendencies. 8.5 miles is a long way, especially when I hadn’t raced on trails in months. All I remember from last year was a showdown with Winston and Dean, so I tried to keep these guys in sight. Unfortunately they immediately dropped me like a bad habit, and I got stuck in a conga line in the early going. It was tough alternately riding some guy’s back like a circus monkey and then having some beast breathing down my neck. I had to get out of here. Eventually I found a break and went flying ahead like a runaway bus up the side of the trail. FREEDOM. About 3 miles in I see a familiar gait up ahead and it’s Micah. I catch up to him and he gets the circus monkey experience for a bit until he finally can’t take the psychological torture of a crazed Albino Sasquatch chasing him through the woods. I burst into the clear for awhile. After being alone for about a mile, some random guy comes flying up behind me, and he looks age groupery. Damn, this race is already a freaking olympiad of KNOWN superfit middle aged guys, I don’t need randoms too. We hit the course detour about 4 miles in and all of a sudden we hit a wide open road. PERFECT. I throw the shades on and enter into road racing mode for much of the next mile, tracking down the random and catching sight of some tangerines up ahead.

By the time we hit the singletrack again, Dean and Winston are in shouting distance and Craig Wlaschin is just ahead. I pass Craig, who I figure is either tempoing it or having a bad day because he usually kills me. Random is guiding my way and even passes Dean and Winston up ahead. Finally, I reach them too. I’m pretty gassed from catching up (early miles were 7:50ish, last was 7:15), so by this point all I can do is be the caboose on this 3 man train.  At this point I do some quick calculating. I know Dean and I finished within 2 seconds of each other last year. Dean, and probably Winston too, know this course like the back of their hand and presumably, know how to pace and where to step. I figure I’m in a good spot to just hold on and match these guys, and hope for the best at the hill at the finish.

The next few miles are a blur of tangerine. All I can see is Winston’s back and Dean’s fabulous rhinestone sunglasses. Dean pulls away on the downhills but we catch him on the inlcines. All of us pretty much lock step for what seems like forever. I’m not even totally sure if they know its me behind them, though I’m sure they know some large smelly mammal is back there. Just after mile 7 we hit a long, uphill area that’s pretty open,which is the first part I’ve recognized in miles. All of a sudden, Counselor Holliday acts like he’s seen a federal felon up ahead and takes off. I get frantic and plow ahead after him. Dean says something like “ENJOY, FELLAS” and figure he’s done. Winston is crushing it up the hill but I manage to keep up. We take down a few roadkill along the way. We both slow a little towards the top as the surge apparently has us both pretty wiped. I see Rick Stroud up ahead making a right turn, which I recognize as being just a little over a mile to go.  Having caught our breath a bit, Winston flies down the ensuing decline with Sasquatch in tow. I feel someone on my back now. I take a millisecond sideways glance and I see is oversized bedazzled sunglasses. Damn it, Schuster. The pace is now rabid bear chase level. I get frantic towards the finish of races but know I’ve got to time this surge just right. After a long decline I see an open road in the clearing ahead, which I know must have the killer finishing hill just beyond. I’m starting to gather my strength but all of a sudden there’s a huge water crossing ahead. No way to make this pretty. Winston sidesteps just a bit but I plow through the creek with zero regard for personal safety. The water is insanely cold and I use the adrenaline to push all my chips in.

Crossing the road I attack the hill mercilessly. Arms are flying, legs churning, lungs gasping. I’m probably pulling about mall walker mom pace but damned if it isn’t 1000 percent effort. I hit the gravel road at the top and I’m deathly afraid of Dean outkicking me. He almost caught me last year when I thought I had it in the bag. I seem to have forgotten there is yet another rise just after the gravel road. I’ve got nothing left but the adrenaline has still got me jacked up enough to fake it. At the turn, Garrett Smith tells me its a quarter mile to go. Thankfully its all downhill . I fly down the trail looking like a complete hot mess. Arms flailing everywhere trying to avoid a major wipeout, which seems imminently possible with every root and dip in the path. One last surge as I see the red numbers of the clock and Rick and the random guy (Michael Wyatt) finish up ahead. Crossed the line in 1:06:08, with Dean and Winston finishing just seconds behind.

I would like to think this was a beautifully planned tactical race, but as it turns out, there were just too many 40 something beasts. Took 15th overall, 6th masters. They did 10 year age groups too, so our trio had an all out epic battle for 5th in age group. Even with 5 year groups I would have barely made third. I got 8.46 miles for the detoured course, though some people had over 8.6.

In the 12k, Ian Rose and Keenan Miller took the top overall spots with Justin Bishop and Tim Gibbons just a few seconds behind. Hope Whisman won the women’s race by 9 minutes, with Sydney Frontz and Caitlin Markham finishing the podium.

In the 5k, Anthony Brown, John Henis , and Matthew Hooper took the overall. 23:50 was the winning time, making me wonder if I might have had a chance at the trophy hunt holy grail. Alexa Leopold, Erin Leopold and Jaime Walvoord won the womens race. 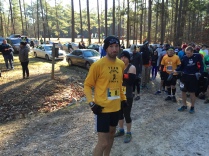 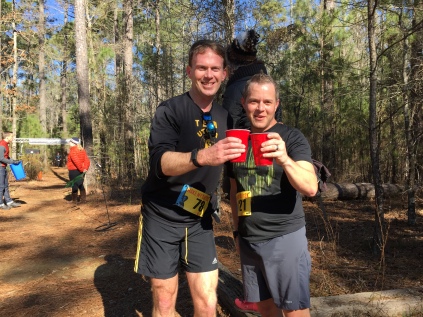