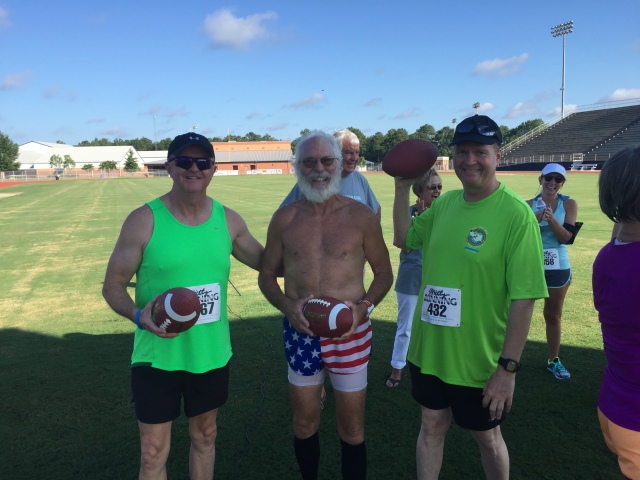 The Able Club Race to the Press Box is now in its 3rd year, directed by runner and softball mom extraordinaire Amanda Holland and going to benefit Lugoff-Elgin’s Dorton/Evans Scholarship fund. I did the race 2 years ago when it was in May. Then I gave Lady McGaha and Whitney Keen a beatdown after an early challenge, but got smoked by Bedenbaugh and Heather Costello. Heather ended up winning the whole thing.

Last year the race coincided with a couple of other events, so I ended up missing it. To avoid conflict this year,  Amanda moved the race to the current date in August. I am a sucker for small town races – always good for a change of scenery, and of course the smaller crowds amp up the trophy opportunities.

Speaking of amped up, I was pretty jacked about last week’s Hot Summer Night – a 19:15 on a brutally hot night and actually a 2016 PR. Code Brown was so demoralized he had to phone in a 22 minute effort after the Sasquatch pulled away. Even though I knew the Press Box has a longish course (though certified), its rural site and competition with the ridiculously cheap 811 5k sent my trophy sense a-tingling.

So what do I do to prepare? Everything you shouldn’t.  I got home late from work on Friday and did a brisk, hilly 4 miler in the 95 degree heat. Came home in a dehydrated sweaty mess and then left for the Fireflies game less than an hour later. Four bud lights, a crap-ton of really bad ballpark food and a long game with fireworks meant I didn’t get to bed until almost midnight. My 1995 self would scoff at this “night out” but my 41 year old self knew this would not be pretty in the morning.

Luckily, Lugoff is only about 20 minutes from my house, actually closer than a lot of Columbia races. I was still running late though, as my stomach waged an unholy war against the Single A league ballpark soft tacos. Dear God make it stop. I finally emerged sweaty and victorious, but I had less than 15 minutes until race time, so I did a half lap on the track and a few stretches before they called us to the start line. My trophy hopes were dashed immediately with the presence of Columbia’s running power couple, OJ Striggles and Shawanna White. Plus, my nemesis Drew Williams was on hand to probably give me the beat down too. Robbie McLendon, Betsy Long, Melinda and Reese Petruzzi, John Gasque, Pete Poore, Rocky Soderberg, Henry Holt, Andrew Lipps, Heather Costello, Brigitte Smith, Caprice Poore and the Robertsons were some familiar faces.

After having high hopes the past week, my race strategy morphed into just surviving by this point. In addition to the tenuous state of my belly, I was facing about 80 degree heat with high humidity. Plus, I knew the course to be slightly uphill most of the second half. Let’s not forget the zero warmup. This was going to be ugly.

Sure enough, the gun goes off and there’s no denying, everything feels like crap. Shawanna and OJ separate out right away with some teenager latching on. Drew and Heather are the next ones back, followed by a few teens and finally me. First mile is a good one for a fast start , since it’s a gradual downhill where you can go hard and not have to brake. Without the warmup, my legs are still ridiculously tight and everything feels sluggish. My morning routine was so chaotic that I forgot my sunglasses, so of course now I’m completely blinded running right into the sun. Drew is starting to pull away but there’s not much I can do.  After replaying this Debbie Downer stuff in my head for a while, I realize we are nearing the mile marker as the course starts to level out. I am sure it’s going to be close to 7 minute pace when my Garmin suddenly spits out a 6:10. WTH?I’m totally confused but I know it’s legit as I know the course. Williams and maybe Costello must have gone sub 6.

The downhill mile must have been good for my system since I think the Bud Light toxins got flushed out and the legs finally start moving again. This is good, because the course is done with its fun and games and is about to get real Janet Jackson nasty in a second. Somehow I manage to pass Heather early in mile 2 and do a few short turns before we hit a long straight hill (I think Critzer dr if I’m reading the map correctly). Suprisingly, I can see Shawanna and OJ up ahead with the lead police car, so OJ is clearly just pacing with her and Shawanna is probably mailing it in too. The teenager has fallen back quite a bit near Drew. We’ve already done some climbing, so I seem to remember that most of the rest of the elevation gain is on this hill, with mostly flat thereafter (editor’s note: this is dead wrong by my garmin data, all slow uphill to the finish). I almost caught Coach B on the hill in 2014 until he had enough of some pasty Sasquatch trying to steal his thunder.

I decide to push most of my metaphorical chips in the table at this point, figuring that the hills have always been my friend. I power up all of Mt. Critzer as best I can, arms pumping and fighting the morning sun.  By the time I reach the top I’ve reeled in Drew pretty close, with the kid not too far in front of him. Mile 2 was right near the summit, 6:25 split. By this time the heat has really built up and I am definitely starting to hurt, my only solace being that these guys went out way faster than me and may be dying more. I finally catch Drew after taking a painfully long time to close the gap. I’m pretty sure he could see my giant shadow lurking behind him. The kid had no idea what was going on because all of a sudden he jumps back in apparent fright when he feels a rabid bear barreling down on him. He looks pretty fit, so I can only think he’s toast for making the very bad decision to try and hang with Shawanna and OJ.  Dude, I could have told you that. After passing him I start to recognize the area near the stadium so I give it all I’ve got…which is pretty much nothing at this point. The engine is overheated and I am dying a slow death. I finally hit the track for the painful half lap to the finish. I usually love the track, but it feels like an oven out in the sun. Up ahead I can make out the red numbers and its getting close to 20. Damn, I forgot this course was a little long (3.16-3.20 by informal survey). I launch into full headless chicken mode, form going completely to hell. I slap my Garmin just as I hit the mat – 19:59.9. YES. I knew Strictly’s timing system would round it up to 20 flat, but at least I could rest assured that ugly display was not all for naught (Ashley from SR also verified a 19:59 and change by the official time).  Mark Robertson captured the horrific scene on video and Nicole captured a race face for the ages: 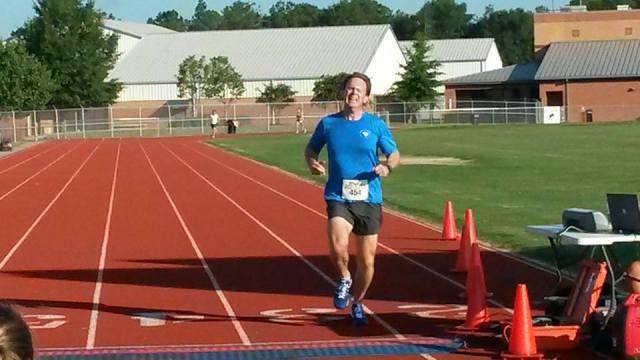 In the overall, Shawanna took the win in 19:10 with OJ a step behind.  Easy money for both. Sasquatch and the kid (Chandler Barrett)  finished the podium for the guys while Heather Costello and Sharon Cole placed 2nd and 3rd for the women.

Age group honor roll (awards were rubber footballs,  really cool) : Amanda’s daughter Sophie won the women’s 15-24. Heather Costello and Betsy Long won the women’s 35-44 , while myself and Drew went 1-2 among the men.  Andrew Lipps placed 3rd in the 45-54, with Sharon Cole winning among the women.  The 55-64 was a CRC sweep with Robbie McClendon, John Gasque and Pete Poore. Melinda Petruzzi won the women’s 55-64. Henry Holt and Rocky Soderberg won 1st and 3rd in the 65-98 men, with Brigitte Smith claiming the women’s top spot. 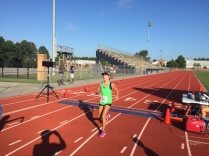 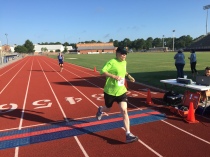 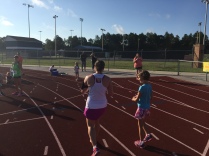 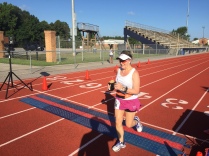 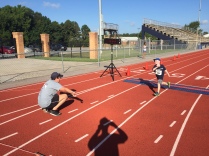 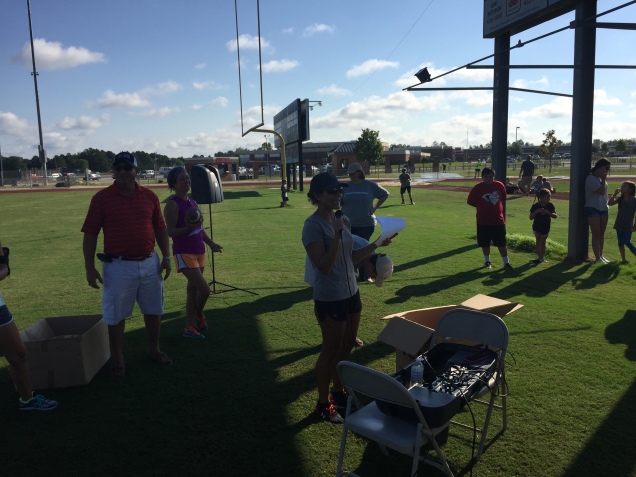