I’ll admit, this was a complete, unabashed trophy hunt. After suffering a world of hurt at the Press Box 5k, I came home and crashed for a couple of hours. Like zonked out, totally asleep. I woke up and felt a lot better, and then I remembered there was a second Tour de Columbia race that night. My insider sources told me there was going to be a meager turnout, which I expected with the Press Box and 811 races in the morning. I was fully expecting to be doing something that evening, but it turns out my social director let me know there was nothing on the schedule. I tried to resist my addiction all afternoon, but eventually I succumbed to the urge to double dip at the Philip’s Nighttime 5k. This was a race at 7 pm , at Lake Carolina, only about 15 minutes from my house. I was in.

Surpisingly, these delayed double dips are actually more tricky than the more typical morning races in rapid succession. Almost 12 hours is plenty of time to get tight and sore, and to lose all motivation to race. But I had studied under the tutelage of the great double dippers before me, like John Gasque, Pete Poore and William Schmitz, and I was now a total professional. My PhD thesis was the 2013 March triple dip, 3 5ks in less than 3 hours, with a total spanking of Trophy McGaha in the final race. Such a beautiful thing.

I showed up super early to Phillip’s and there were only a handful of people there, none of which I knew. Shannon, Jeff, George and Susannah were there for Jackrabbit Timing. They confirmed only about 20 people registered. Bad for the race, good for the trophies. I have zero shame when it comes to shooting for the holy grail, the overall victory. Plus, Lake Carolina was the scene of one of my few wins, a 2013 New Years day 5k put on by Velocity Distance Project, a one-and-done race with very little evidence of my victory against like 30 other people. I did a solo warmup of about a mile which was pretty miserable. It was just like Press Box only about 15 degrees hotter. To boot, Shannon informed me of the course, which I recognized as the Harborside Lights 5k route. This hilly monster produces slow times even in December.

But maybe I could mail it in. Jonathan Kirkwood showed up, though, and this made me a little scared. True, I knew Jonathan hasn’t broken 20 minutes, but I was weakened and he had put up a good fight at Hot Summer’s Night. Plus, he’s like 60 pounds lighter than me. Damn, I was going to have to try.

There was a bit of a delay in the start, but apparently it was for the RD to assure everything was in place before they got started. I wasn’t complaining, figuring every minute meant a little but cooler. Probably 90 degrees at the start, high humidity. I didn’t recognize it at the time, but we seemed to be starting at a random point in Lake Carolina’s Town Center, away from the Harborside start line. Only about 20 people at the start. Melinda and Reese Petruzzi were also double dipping. Rocky, Jonathan and Katharina Vorhauer were the only other people I recognized. There were a couple of other fit guys that concerned me, but I think both had headphones, which I rarely see with runners under 7 minute pace.

With the start, Jonathan takes off like a beast and I am caught by surprise. It’s not 100 meters in and I’m already running faster than I had planned. The lead cop car pauses at the middle of the divided lake carolina drive entrance road, and Jonathan turns left into the oncoming traffic. Holy crap. I’m hugging the right side of the lane as traffic comes to a momentary standstill. Jonathan starts to veer off to the left at the traffic circle so I yell at him to come back to the course. He responds by jumping right in front of an SUV, scaring me to death. Dude means business. The first mile is almost all downhill through Harborside. Kirkwood is crushing it downhill, like a springy gazelle behind a lumbering grizzly. This grizzly is trying to rein it in a bit because a) I’m not sure how much is in the tank after Press Box and b) the remainder of the course is an unrelenting hell. Ok , I may be exaggerating a bit, but you have to climb right back out of Harborside and then scale a miserable out and back mountain loop.

We hit the bottom of the Harborside loop at the lake and I’m sitting about 10 meters back. We make the turn and the hill going back up hits like a ton of bricks. Mile 1 in 6:23, though it felt faster. Jonathan is still a little bit ahead and I briefly consider the thought of letting him go. It would be nice to take it easy, Jonathan would get the win and everything would be great, right? WHO AM I KIDDING? Yeah, I would probably blue shoe my mom if it meant getting first place. Less than half way up the hill I’ve made up the gap and surge to the front. Oh God – I’m on my own now, hopefully. Just don’t blow yourself up. I’m hurting by the time we finally get back onto Lake Carolina Drive and mercifully there’s an immediate plunge downhill (which I know I’ll get the privilege of climbing back up on the way back).  I hit the bottom of the valley and then here comes the pain. A half mile straight up. The first part seems OK but pretty soon the 93 degree heat starts taking its toll. By the time I near the turnaround it feels like I’m barely moving and sucking some serious wind. Split is 6:43, slowest 5k mile in a long time. I’ll take it considering the double dip and the conditions, though. I’m not sure where Kirkwood is, but I’m sure he’s lurking not too far behind.

Just after the mile 2 mark is the plunge back down the half mile hill. Legs are toast at this point. Just flopping down the hill as hard as I can go. One last steep hill to go. I’ve got nothing left, but seeing the Town Center sign up ahead surges the adrenaline. Rounding the last turn I can make out the clock and I’m shocked to see it still in the 18’s. I can’t hear anything behind me but I make sure to sprint it out to make sure. I cross in 19:15, 1st overall! Garmin shows a super short course at 2.97, which makes sense since we got about a couple hundred meters head start from where we were supposed to begin.

OK, so winning a 21 person race probably isn’t something to brag about, but crossing that finish line first never gets old. Second holy grail of the year! Nice lamp as the trophy too. 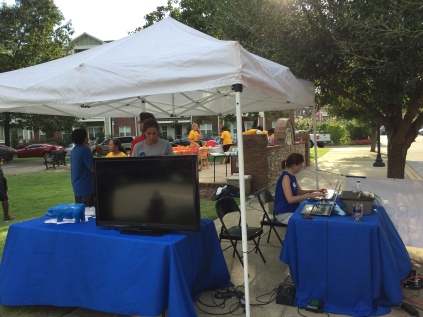 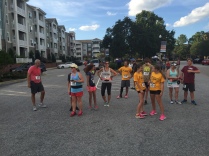 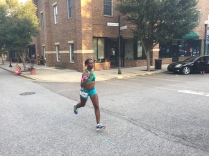 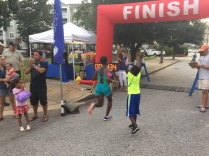 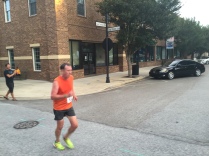