The Springdale 5k is a race held near the Springdale horse track in Camden, going to benefit the Kershaw County United Way. I first got interested in this race in its first year in 2009. At that time, it was called the Springdale at Sunset, since it was held at 7 pm, and was actually staged on the horse track itself. All I remember from that race is that it was 94 degrees at race time, and the grass was ankle length the whole way. I died a thousand deaths on that course that night, going out too fast and then almost walking in the last mile. I got into an epic pissing match with Chad Long, with him passing me 200 meters from the finish and then me blowing by him right before the tape. One of my deepest race photo regrets was not buying the whole 8 pic montage of that incident, complete with horrific race faces and a sweaty, bare bellied contortion at line, where I leaned at the tape like an Olympic 100 meter final. Strictly Running, if you have these in your vault somewhere, I will pay a premium for their recovery. I did get the “win” though, a meaningless 8th place over 2 minutes slower than my PR at the time.

But that was many years ago. Sadly, they’ve moved the race off the track and into the surrounding neighborhoods. It certainly has made for a more comfortable race, but they’ve taken away the post race party with beer and music they had in 2009.  I had missed the race for a few years before coming back in 2015, fresh off a summer plagued with injury and low mileage. As my melon headed grandiosity is wont to think, I went out last year like I was in the peak of fitness, only to suffer one of the most painful last miles of all time. I almost walked and ended up with a 20:40, my slowest time in years. To make things worse, Brandenburg was on hand to revel in my shame. See below:

A year later, having had a much more productive summer, I hoped to erase that miserable death march from my memory.

The map, of course, doesn’t do the route justice. Basically you drop in elevation almost the entire first half, lulling you into a false sense of confidence. You then make that turn on Forest drive and then realize, oh yeah, this is a loop course and you’re going to have to climb all the way back. Don’t forget you’re in South Carolina in August. Fun times. None of it is super steep, just unrelenting and  when your legs and lungs are toast. Be forewarned.

I showed up on race day my usual hour early, but spent most of it avoiding a warm up in the heat. To be fair it wasn’t super hot , but the rain the night before rendered some sauna-like conditions. 75 degrees and 89 percent humidity per Garmin. Erin Roof and Eggplant Events, along with Start2Finish timing always do a good job with the set up and things were going smoothly. Sadly, I missed the elaborate packet pickup event they had the night before. I’m all for pre-race parties but I wasn’t making the hour round trip to  Camden for that. I was pretty impressed with the horseshoe trophies and post-race waffle station they were setting up.

I did a solo mile warmup and tried to scope out the competition.  Chandler Barrett’s sister from last weeks Press Box 5k points me out as “that guy who wrote the article about my brother”.  Lolz. I didn’t see any adult elites, though Parker Roof was on hand and a pack of teens I assume were Camden high cross country. The holy grail was probably off the table. In my range, there was only Wilson Harvey and Whitney Keen  I recognized. Since I was out of Columbia though, you never know which randoms might come out and steal your trophies. We would see. John Gasque, Rocky Soderberg, Pete Poore, Brigitte Smith were the CRC regulars on hand. Betsy and Chad Long, Kara Clyburn, Martie McCallum (taking pictures)  and Caroline and Julia Keen were representing for the Camden/Lugoff/Elgin contingent. Kerry Stubbs was there for RWB. 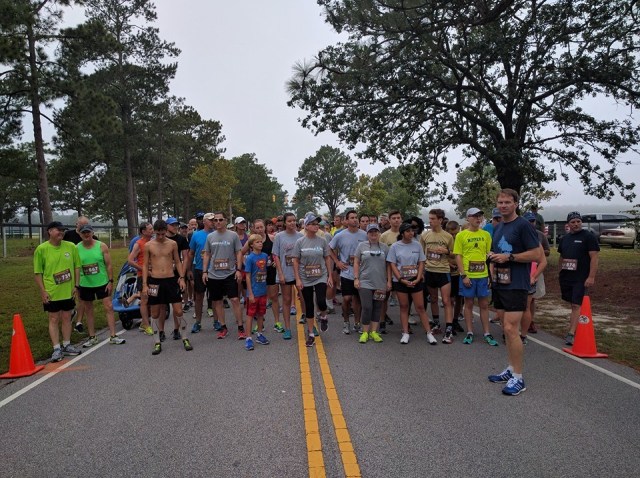 Starting horn goes off and we get released on the roller coaster downhill of the first mile. Parker and the Camden kids sprint out ahead of me. As we plunge down the hill, a guy with grey hair and a sleeveless tech shirt pulls alongside of me. I always worry about the superfit soccer dad types but this guy may be another trophy stealer, the aging elite. Aging elites ran like 15 minute 5ks when they were younger but still throw down 19’s in their 50’s and 60’s and take my precious masters points. Dave Geer pulled this trick on me at the Richland RUNS 10k in 2014 – I try to hang with an unassuming 60 year old guy , and he ends up spanking me in 37 minutes and sets at a state age group record. That was before I knew who he was. The guy this morning seems pretty fit but he drifts back at about the half mile mark. As we near the mile mark, another guy pulls up alongside the Albino Sasquatch freight train, who I recognize as leading the high school guys on their warm up run. I tell him how nice it is to have all this downhill, but how that trip back isn’t going to be so much fun. I was just running my mouth but I think it ended up coming out as some kind of psychological warfare. Either way, he drops back just after we pass the mile mark in a brisk 6:06.  Most of the downhill has faded away by this point but at least its flat on 5 Bridge Rd and Brook Dr .

At 1.69 miles is the turn on to Forest Drive and you’d better be ready. Nothing but a gradual incline all the way back. I know its coming, but it still sucks. The pace feels a lot slower as we start slogging up the hill – again, not steep but gradual and unrelenting. Since I spend much of my time suffering on the mountainous entrance road to Sesqui park, I can feel the hill engine kick into gear. Mile 2 passes in 6:18, so still pretty good. I know mile 3 is all uphill. A couple of the kids and some fit-looking 20 something guy have paid the price for their sub 6 first mile as the incline and the warm blanket humidity start to take their toll. I pass these guys and plow ahead, arms churning and trying to lift those legs. By 2.5 miles in I’m starting to hurt pretty bad myself. I keep having hallucinations that the finish is just around the next turn , but I keep getting disappointed until I start checking my watch to prevent any further mirages. I am pretty much toast at this point until I realize the runner up ahead is Parker Roof, and he’s looking back. This gives me a jolt of adrenaline and I try to surge ahead. I start making up some ground but just as I make some headway, the real finish appears. I figure I’m running third and definitely first guy that can legally buy a beer, because there were just high school kids at the front. I see the clock turn over to 19 from way out and I sprint to the finish in 19:28 and change, flopping on the gravel over the line. I just can’t coast on in, apparently. Erin makes sure to capture my gravel road love making in all its ugliness. 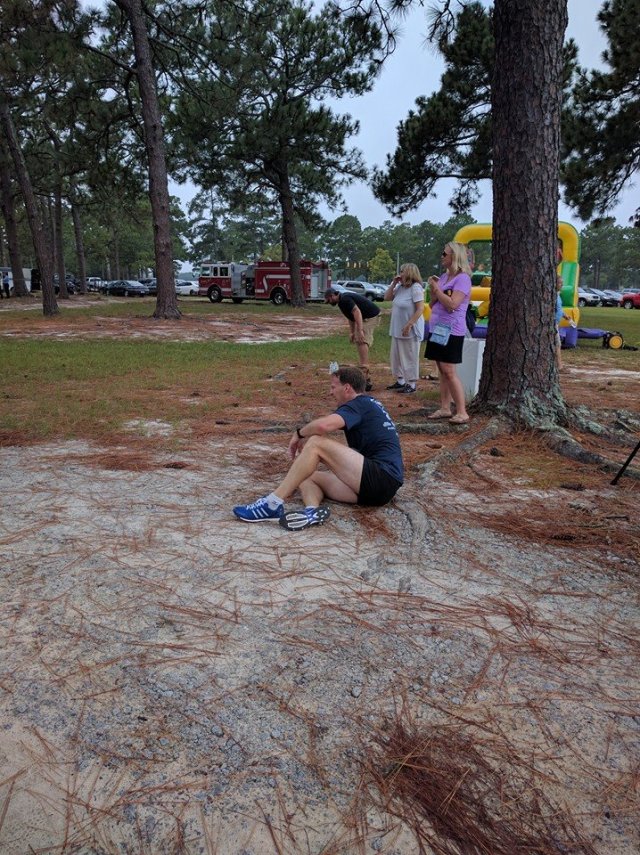 I’m so sure I got third I don’t bother to check the results until Erin tells me Parker took 3rd and was feeling pukish at the finish. I guess turning around and seeing my third mile kick is scary enough to turn the stomach. Turns out there were 2 kids up ahead and I actually took 4th . But hey, I’ve got 25 years on all these guys, so I was pretty jacked. 1:12 faster than last years debacle and first masters – pretty sweet. Good thing Springdale regulars Brandenburg and Bedenbaugh stayed home!

In the overall, Garrett Lawson and Samuel Messinides took the top 2 spots with Parker 3rd. Sharon Cole took yet another win among the women, with Whitney and Caroline’s daughter Julia placing 2nd. Laura Holt placed 3rd. In masters, Kara Clyburn took 2nd without any idea what masters is, since she just turned 40. I told her its awesome to be old. Emily Skufka and Heather hawn placed 1st and 3rd. Whitney Keen took 2nd masters among the men.

Age group honor roll: Wilson Harvey set out to break 20 and did just that with a 19:53 and a 25-29 win. Garrick Douglas placed 1st in the 30-34, with Melinda Kurhan 3rd. Chad Long finally recovered from the 2009 showdown and took 1st in the 40-44. Caroline Keen won the 40-44 women in a very good day for team Keen. My med school classmate Michael Nienhuis won the 45-49 with Mark Chickering 2nd. Joe Roof crushed the 50-54 by 6 minutes.  John Gasque took 2nd in the 55-59, with Pete Poore taking the 60-64. Brigitte Smith continued her domination of the 65-69, while Henry Holt and Rocky Soderberg placed 1st and 3rd in the 70+. Great turnout for this race and a big enthusiastic presence by Camden High – nice job to Erin Roof for continuing her awesome race directing with Eggplant. 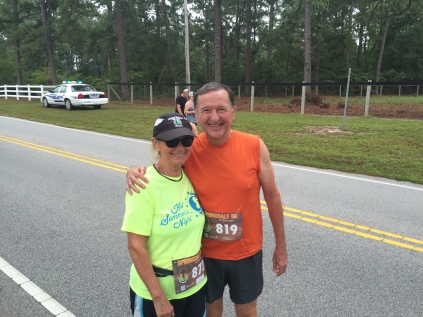 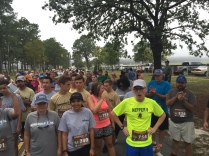 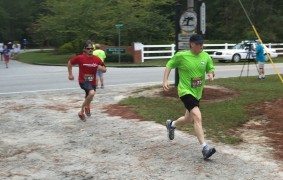 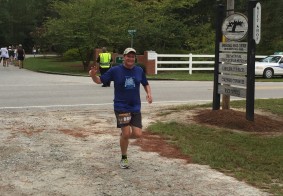 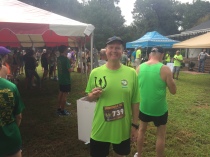 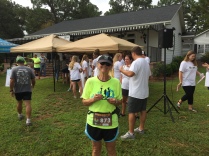 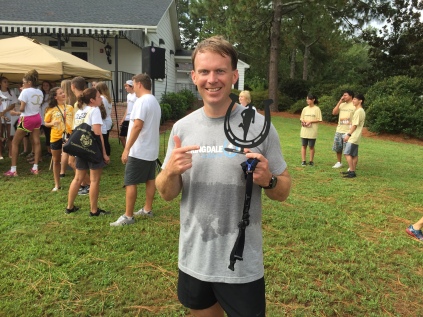 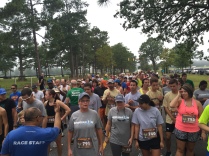