The Fallen Fireman 5k is a second year event, put on by Erin Roof and Eggplant Events, and going to benefit the Jeffrey Chavis burn center in Augusta. Jeff Chavis was a fireman from Lexington who lost his life in a fire in 2001, and his family has put this race on to honor his memory.

I did this race last year, which was delayed by a few weeks due the infamous 1000 year flood of 2015. I was hoping for a trophy hunt with the rescheduling and did end up 4th/1st masters.  I didn’t remember much about it, other than the futile effort of chasing down the Yerg and suffering a thousand deaths on the hilliest course known to mankind. But other than that, it was great. Actually it really was – Erin and Eggplant always put on quality races, and if you’re in Lexington, there are going to be hills. Just don’t go shooting for PRs on this monster.

This year, there was the option of doing Crooked Creek, which actually got postponed this  year for excessive rain. I hadn’t signed up for that one ahead of time, and I knew the Code was doing Crooked anyway. Yerg was doing an ultra in the upstate. Last years champ Jason Dimery hadn’t been doing any recent races. With Crooked and the Lexington Half preview also going on, my overall trophy sense was tingling for Fallen Fireman.

Getting there over an hour early, things were looking good initially. The temps were amazing. The first cool racing morning in months – mid 50’s. Didn’t see a whole lot of familiar faces in my warm ups. The Hinsons were on hand – amazingly Marion had just done a full Ironman the weekend before. That is nuts even by my obsessive standards.  Lisa and Jesse Smarr were racing to celebrate both of their birthdays. Leeds was out to defend his home turf again. John Hauser, Deirdre Maldonado and son Louis,  Joe Roof, Peter Mugglestone, and Cheryl and Tommy Outlaw were some other CRCers out on this near perfect morning for a race. There were a few random fit looking dudes out there that might be out to steal my trophy. I saw one guy with a USC track jacket that pretty much ended my holy grail (overall win) hopes, though.

There was a pretty nice turnout this year, 200+ I think , and the crowd was a little slow getting lined up. I was busy taking pics when suddenly the emcee guy gives a quick 5 count and GO! Yeah, I was totally not ready. I turned on a dime with my running belt and key in one hand and my iphone in the other. I sprinted out ahead, but it turns out putting this stuff on was a little harder at sub 6 pace than standing still. After a brief moment in the sun for 100 meters, three guys passed me as I took another quarter mile getting the damn belt, my car key and the phone in place. First half mile to this race is a freaking freefall down South Lake drive. I was trying to relax and let my significant gravitational advantage take hold, but also realizing I needed to save as much energy before hitting the brutal parts of this hillfest. I could see USC guy and some other young, skinny guy up ahead going shoulder to shoulder, and I figured these guys were a lost cause as far as my Sasquatch ass catching them. The Red shirt guy just in front had a mere mortal’s physique and I was nervous he might be one of these stealth fit soccer dads that always lurk in the shadows to steal my glory. Luckily,  the first mountain sticks a fork in him right away and I pass him on this hill, which is probably the second worst climb on this roller coaster course.

Mile one is right over the crest of this mountain, split was in 6:34 – a lot slower than my 6:08 blast off from last week, which probably also explains why I’m feeling relatively good at this point. This is fortunate, because the second mile of this course has 90% of the overall pain. Sure, you start off with another freefall, but the rest of the mile is 3 separate up and downs on Church Street. The last of these is the worst, a long soul crushing slog with the mile 2 marker at the summit. Knowing this course, I admit I did a little phoning it in for a while. The two leaders with the cop car were in the distance and there was no one behind me. It felt like I was out for a race pace interval in the middle of a Lexington mountain range. I started drifting off into trying to figure out who USC was going to lose to that afternoon and how Code might be hitting the trophy jackpot up in Chapin.

One thing was sure, all the heat training this summer was giving me a third lung, because this weather was making things so much easier. When you’ve grown accustomed to sweating your balls off in hundred degree humid afternoons, 55 and breezy feels like heaven. The soul crusher at the end of mile 2 wakes me up as I start some wind suckage hauling my Clydesdale butt up this mountain. Mile 2 comes back in 6:31, so actually a little bit of improvement. Probably helped I wasn’t trying to get dressed for the race on the fly like the start.

I wanted to try and rock out the third mile, but climbing the last hill and with no Yerg to chase, it doesn’t seem to be happening. I finally catch my breath well after the turn onto Third street. The course mercifully flattens out for a little, but then I see the street plunge down after we cross Hendrix st from the Race Against Hunger. Damn, I know were going to have to climb out of this hole. Sure enough, another short but quad crushing incline all the way back up to Main Street. I’ve lost the leader but I can actually see 2nd place, so I must have picked it up a bit. With a nice mostly downhill to the finish, I try to ramp it up a bit. At least try and break last year’s time. I hit mile 3 at 6:21 and I have brief delusions of breaking 20 on this hillfest. I throw down as best I can but the legs are pretty trashed. Despite the sprint, I cross in 20:10.  I hate going over 20, but this is about 25 seconds better than 2015, and third overall is nothing to cry about. I think this course is probably 45 seconds to a minute slower than a flat route, so I’ll take it.

Age group glory: I may miss some since the age groups aren’t separated on the readout: Marion Hinson was 1st in the 40-44 with Shawn Sturkie 2nd. Leeds Barroll held off Peter Mugglestone in an epic finish: both won their age groups. Tommy Outlaw was 2nd in the 60-64. Cheryl won the 60-64 women. John Hauser took the 65-69 men. Jesse Smarr got 2nd in the 70+ for a nice birthday present.

I saw this story after a pic I posted of Michael Lambert (3rd place in the 70+)  from the race got a lot of likes – pretty inspiring! Nice job, Michael! 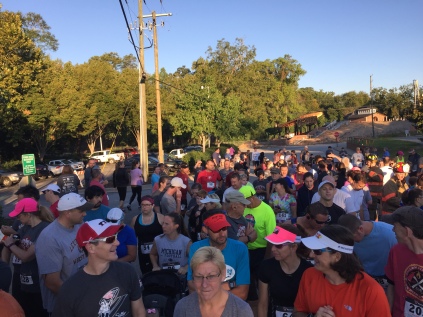