The Famously Hot Half Marathon is the latest addition to Palmetto Health Foundation’s Walk for Life series, which originally started in 1991. A few years ago they tacked on a 5k and then a 10k to the walk, and its been a mainstay on the Blue Shoes calendar ever since. Its cool to see literally thousands of walkers fill the streets after the race, and my family (they do actually exist) has often done the walk while I selfishly go for age group glory on the flat and fast course. Here’s a pic below, for which I suggest you wear sunglasses before viewing:

Damn, we’re white.  The old 5k course was awesome, but the 10k they added later was absolutely brutal. This year, they decided to go big and add a half marathon, plus move the whole thing from Finley park to the new Fireflies stadium.

I somehow got suckered into running the Kiawah Half in December, so I started the training about a month ago. The smart thing may have been to race the 10k with the limited training lead up to this event, but sound, rational decision making is not my forte. Four days before the event, I had a couple of beers and committed my most common crime: RRUI (Race registering under the influence). I was going to do the half.

Half marathons are probably my favorite non-5k race, but they are still kind of scary. You line up for a 5k, and you know its just balls-to-the-wall, 20ish minutes of pain. No water , no gels – just lace it up and haul ass. Halfs actually require some degree of pacing, hydration and nutrition, which my simple racing brain has trouble comprehending. I have found that optimal half pace is actually fairly comfortable, which makes sense since you’ve got to hold it for 90 minutes plus. I had heard from Justin, and from Ken at the race, that the course was fairly flat/downhill until you hit 9.75 miles, and then…not so much. I figured I’d shoot for 1:30 since I was probably not in top PR shape (1:28:27 at Swamp Rabbit this past spring).

I got up at the absolute crack for this race, since the half was going off at 7:15. Temps were surprisingly chilly (40’s) and pretty much perfect for racing. After doing a little bit of warmup there didn’t seem to be any elites on hand. I suddenly remembered that I had missed Ray Tanner the week before with the family vacay to the mountains. I forget normal people actually take breaks after racing. So weak.

It was actually still dark at the start, and 30 minutes before the 5k/10k, so I didn’t see a whole lot of familiar faces. The line was just outside the entrance to Spirit Communications Park. Jen Krzyanowski and Angel were on hand, so I figured they would be good pacers. Melinda Kurhan was up again from Charleston with boyfriend and family, enabling her newfound racing addiction. Anita Recchio, Kyle Addy, Jen Lybrand and Julia Norcia were the only others I could see in the pre-dawn darkness. Angel introduced me to a kid who he said ran 17 minute 5ks and was the fastest in the state.

I’m waiting around for the rest of the crowd to start edging toward the line, when out of nowhere, the gun goes off. Suddenly one guy sprints out from the start followed by me and Angel going WAY TOO FAST right off the bat. The first mile loops right back by the start, similar to Ray Tanner (i.e. another Ken Lowden design). The crowd support is nice but of course it only fuels more poor pacing. The kid blows by right before the mile mark and me and Angel both hit it at 6:33. Whoopsy. That’s going to suck later (FYI 1:30 pace is 6:54) . A teenager in sweatpants is in our mini pack and actually breaks away from us as we leave the park area and go out onto Harden extension near the hospital. Damn, I’m already getting smoked by a 12 year old and somebody in sweats. Not a good confidence builder. On Harden st, some unknown tall skinny white guy passes me and joins Angel, who has started to gap me too. Even though we are at the front, me being in the back of thid pack feels like I’m dead last. Sprint guy is still far ahead but definitely not going sub 6 like he was out of the gates. Mile 2 comes back in 6:52, so back on track pace wise. The course then does a mile ripped out of the Bunny Hop course, followed by a long trek on Calhoun St from the original Finley Park based Race for Life. A bit of a cross breeze but temps feel awesome. I settle into my high 6 pace and it feels pretty decent.

Until I start hearing footsteps. What dude is tracking me down now?? I glance over my shoulder and see this dude has neon pink shorts and a ponytail. TOTALLY CHICKED. I thought I would know who she was but I’ve never seen her race. What’s worse is she’s wearing earbuds and looks like she’s just cruising through her weekend long run. My ego reels from the bruise to my pride, so I make sure to keep her in range.

There is a long out and back offshoot from the course that brings us by the Palmetto Foundation offices. As I near the turnaround, about 4 miles in , I see the kid out in front just killing it with sprint guy a little behind. Sweatpants still has a lead on Angel and tall guy, with me and female leader a good bit behind.

The next 2 miles are flat, then a huge downhill as you plummet towards Riverfront park. Pace is pretty consistent in the 6:50’s. I was looking forward to Riverfront, since its nice and flat and gives you the option of using the dirt trail. I reach for my GU at about 6 miles in. GU is nice because it can give you a boost of some electrolytes, glucose and caffeine. But as it turns out, the GU is probably less helpful if YOU’VE LEFT IT IN YOUR WARMUP PANTS. Nice job, hero. What’s worse, the Riverfront was perfectly positioned for that brisk cross breeze to be DIRECTLY IN MY FACE. Wind plays a factor for any runner, but when you have the physique of a Greyhound bus, it’s just killer. 2.5 miles of constant headwind start crushing my spirit – my pace bleeds a few seconds upwards and the psychological battle about what’s to come starts to weigh heavily in my mind. At least pink shorts is feeling it too and has gotten reeled in a bit.

Mile 9 is right at the Broad river bridge onto River drive, and its as nasty as Ms. Jackson. Up a pretty decent incline and straight into the sun. My legs hadn’t tasted an incline in 7+ miles and they are none too fond of this. And wait, this wasn’t even the bad part yet. Thankfully we didn’t have to climb all the way up and we took a right onto Lucius road. There was a big water station there where I chugged the fullest cup I could see. I was hoping for a GU angel to come and help, but there was none to be had. I threw the cup in a perfect shot into their trash, did a dork celebration and managed to knock my sunglasses off. So smooth. Stopping and going back to pick them up felt like death, and it was tough to get back on pace. As we continued on Lucius rd, I started getting major flashbacks from the trauma of the See Spot Run/Tame the Beast 12k. Oh noes, we hates those hills.

Lucius starts getting ugly real fast and I realize we’ve hit the much-discussed 9.75 mile mark. The hill, which sucked at See Spot 2 miles in, is just devastating at 10. My legs slow their turnover into the pace of a hunched over mall-walking soccer mom. Probably would have been better to suck it up and walk. You get dumped out onto Lindsey street for a brief respite before meeting her bitchy sister Florence for another incline from hell.

By the time I make it to the summit of Park Street, any chance of the 1:30 is completely shot. I’m hemorrhaging seconds on these mountains and the legs feel like cinder blocks. I plummet down Park street, which at least gave me some wind back in my lungs. Two more nasty climbs on Park and Gadsen have me sucking wind again, but least we are starting to get out of this God forsaken neighborhood (Sorry, Earlewood, I’m sure you’re normally very nice). Just as I approach the Elmwood overpass on Wayne, Sweatpants has officially suffered an epic bonk because he is barely moving at this point. I can only imagine the chafing. After I pass him, I decide I need to payback pink pants for her epic chickage from mile 4. Finally we hit Calhoun street, and I figure its basically all flat to the finish. Blue shoes kick gets thrown down as soon as mile 12 pops up on the Garmin. Legs are so happy not to be mountain climbing that they start actually running again. I start hitting the back of the 10k field, so nice to have some company. Ponytail girl finally gets passed, and I briefly hear her drafting me, suffering an even greater ego blow by getting Sasquatched. From a half mile to the finish, I basically empty the tank. One turn onto Barnhill , a tiny incline and one painful lap around the outside of the stadium. The finish is an awesome run into the stadium, a la Ray Tanner. I make out 1:31 as soon as I hit the outfield  and I sprint it out to the finish near 2nd base, crossing in 1:31:21. 4th overall.

Or was it? I see the results posted soon after and it has a 48 year old woman in 4th with a 1:29. After a protest by Jen K and my verification that “pink shorts” was definitely the women’s winner, they removed the name. Turns out it was probably a half marathoner who switched down to the 10k. No Rosie Ruiz after all.

In the half, the actual winner was the 12 year old kid, but apparently he had just signed up as a walker, so he didn’t get a time. Daniel Hayes, the guy sprinting off the start, held it together and won officially in 1:26. Radek Mittelbach took 2nd with Angel just a few seconds behind in 1:29. In the women’s race, “pink shorts” is actually Holly Smith from Florence, winning in 1:32. Paola Figueroa placed second with Jen K taking 3rd in 1:34. Noel Schuch won female masters with the male masters consolation prize going to some big headed dork.

10k: Drew Williams placed 3rd overall just a week removed from crushing it at Ray Tanner. Katie Rose and Kathryn Cavanaugh went 1-2 among the women. Matt McGrievy was champion of the 40-44. Chris Fawver rocked a PR in 49:20 to win 2nd. Kana Rahman was 2nd in among the women. Mike Hedgecock and Scott Brewer went 1-2 in the 45-49 men. Mario Alvarez won the 50-54 men. Rick Gibbons won the 55-59 men in the middle of a long run while Joe Robinson placed 3rd. Lisa Smarr placed 2nd among the women. John Houser took 2nd i the 65-69 men. Brigitte Smith won among the women. Peter Mugglestone took the 7o+ men, with Henry Holt and Ron Hagell also on the podium. 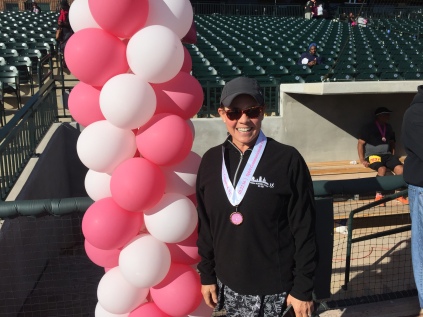 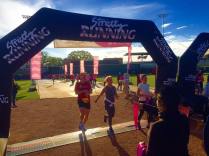 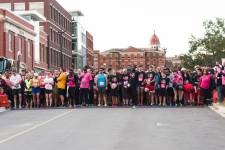 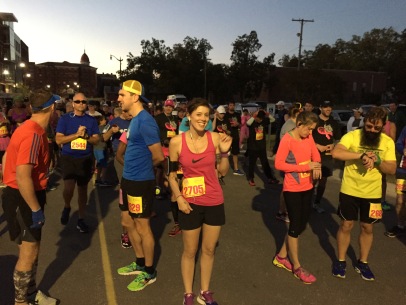 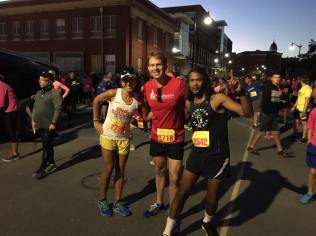