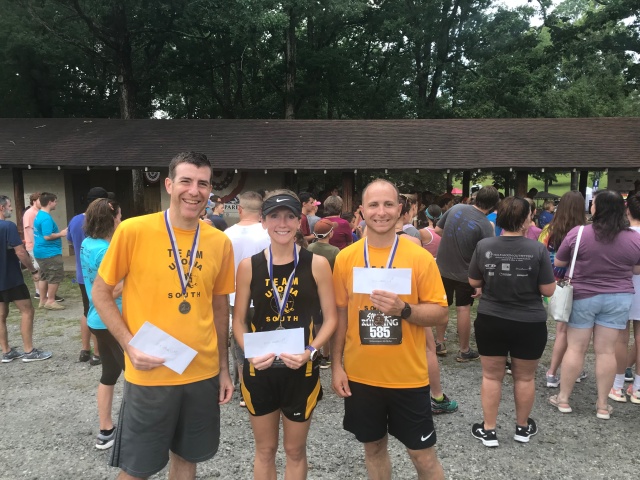 When do you know you’re a hardcore race addict with a serious problem? Hard to tell, but squeezing an early morning trophy hunt that’s an hour and a half round trip just before a family vacation probably meets the criteria.

I’ve only run this race once before, in 2014. Reading the post from then proves that I apparently never change . I went looking for trophies then too, stepping into the 10k and getting destroyed by Plex, Lybrand and even the Code. Total fail. Plus, the course was brutal and I ended up slogging 44 minutes. But, I distinctly recall them announcing the 5k winning time as like 20:40 something. What?? I could do a tempo run and win?? I was totally going to come back and try to capture the holy grail. Plus, the 5k course was different from the brutal 10k, so maybe it was easier for the shorter distance. Yeah….we will get to that.

So as mentioned, the fam was all about going to Folly Beach this weekend, so I occasionally need to be a dad and husband, even though I was crushed not to be able to do Hot Summer’s Night.  We weren’t leaving until late morning though, opening up the morning races. The Sweet Baby O 5k was a lot closer in Saluda Shoals, but I knew fellow age grouper/Carebeer Drew Williams was doing that one, and the temptation for a holy grail was too great. I was going to make the 40 plus minute trek out to Little Mountain in search of glory.

I ended up getting there way later than I usually do for races,  an effect of snooze button hitting and bathroom chernobylizing.  The first thing I see is Mike Nance and David Russell sporting the TUS black and gold, and I’m instantly afraid of my trophy hunting chance is also going down the toilet. Luckily they were in for the 10k, along with Sara Bonner. Ted and Anna Hewitt, Jeannette Farr, Andy Mikula,  Leeds Barroll, Ivery Baldwin and Lynn Grimes were also some familiar faces. I was asking around if anyone knew the 5k course, and Leeds basically tells me its a complete and total nightmare. As it turns out, the 5k skips the fun of the 10k course and just takes you straight up the eponymous Little Mountain and back. He apparently knows the area from hanging out at the little mountain towers in the 70’s and driving the course just before.  Dayum. This was no fun run undercard like I thought. 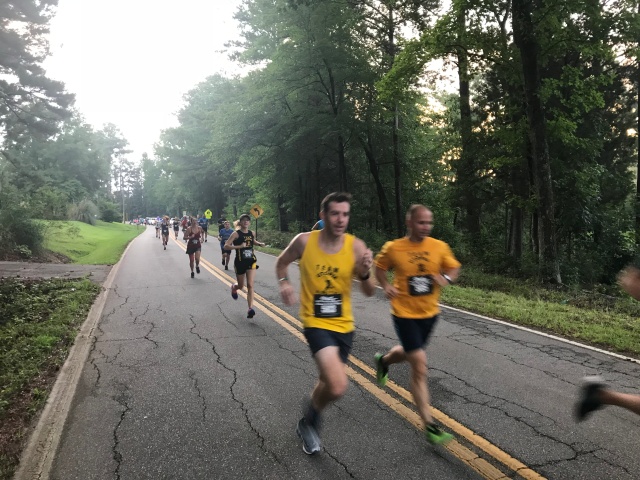 The 10k has a pretty sparse field and they went off at 7:00. I was too lazy to do much of a warm up so I just jogged around a bit and tried to survey the remaining 5kers. My trophy senses were tingling because I didn’t recognize any potential threats, and no lean singlet types. Technically I was wearing the CRC singlet but no one has mistaken me for lean. As we line up for the 5k it basically starts to pour rain out of nowhere.  It had been really hot and humid, so at least it would cool things down some. My last scan of the crowd looks pretty promising and we all take off with the gun. Suddenly, some small superfit dude pops out of the side of the crowd, total Jason Dimery style, and leaves us all for dead right from the get go. I swear it looks like the same dude who ran it back in 2014. (it was – Carlos Hernandez).  First part is downhill , cruelly tempting you to go too fast before an abrupt turn onto the miserable Jacob Shealy Rd. hill.  The poor 10kers have to take on this monster twice. I manage to get myself good and winded right away but luckily the Hercules legs can power up the inclines pretty well despite all the extra weight they carry. I end up in 4th place at the top of the hill after briefly getting chicked by the teen female leader.  Carlos is in another zip code by now but two other kids aren’t too far ahead.  You turn right at the top of Mt Shealy and head back towards the town center, but not before dropping you down half the elevation you just climbed and bringing you up again. Just as we reach the town, I manage to pass the two kids and surge into 2nd place.  First mile was like 6:45, mostly because of the giant hill but maybe me not having done true speedwork in over a month. The flat feels pretty good but is very  short lived as we suddenly take a right turn. There’s a long downhill after this, which feels good at the time but has a sense of forboding since I’ll be doing this in reverse in a few minutes on the way back.  As I approach the bottom of the hill, I’m about to go straight but the cop directs me to this little old road to the right called “Mountain road”. Ruh roh. As soon as I veer off it starts to suck real bad, real quick. First a long gradual incline but then just unrelenting climb. Everytime I think I must be nearing the turnaround at the top it just keeps on going. My lungs and legs are screaming at me and the walksie voices keep getting louder. What’s worse is that I know Carlos has a huge lead on me and I still haven’t seen him on the way back down. Finally I see him flying down the hill. I wait for him to pass then I’m forced to take a brief walk of shame. Of course, as soon as I take a few steps, I finally see the turnaround area under the Little mountain tower. I force myself to go back into my power jog and I’m half delirious by the turnaround. I swear I was having hallucinations of  a long haired Leeds in bellbottoms but I manage to round the cone and start plummeting back down. The road is super rough  and my legs are jello, so I’m trying not to get too crazy on the decline. I don’t do well with falls down rocks.  The out and back course at least gets me to survey the rest of the field. I have a pretty comfortable lead on 3rd place but its hard to stay motivated with only second to fight for.  I haven’t even bothered to check the Garmin split because I know it’s ugly. After destroying my quads on the whole return trip down the mountain, you get that fun opportunity to climb up that downhill you just ran to get to Mountain Rd. I can actually see Carlos again, so he has definitely slowed a lot, but I still have no chance of catching him. Especially since my legs are pretty much toast at this point. One more left turn and its a flat and downhill to the finish. I pick up the pace a little but definitely not the typical Blue Shoe kick . I end up with 21:31 and 2nd overall.

So, not too happy with running 2+ minutes slower than normal, but given this monster of a course it’s not too bad. The only comparable 5k course I can think of is the Hogpen Hill Climb 5k in Helen, GA, which will also take about 2-3 minutes off your standard road 5k times. And yeah, its definitely harder than the 10k course, which is no joke either.

Despite the course brutality, this is a really cool race since its held in conjunction with the Little Mountain reunion festival. There’s a parade , barbeque, beer, classic cars and lots of craft vendors. I took a wrong turn and somehow ended up almost leading off the parade. I had to slow down and do my pageant wave. Luckily the cops were nice and got my inflated ego off the route.  Plus, cash prizes for the overall winners! I got 30 bucks for 2nd place so ended up breaking even. Sweet.

In the 10k, Jim Brophy ruined Nance’s trophy hunt too, taking first in 40:07. Nance took second in 41:44 and David Russell was third in 43:02. Sarah Bonner was the CRC’s top trophy hunter for the day, taking home the holy grail with a win in 48:11. Denise Knight and Ashley Holman were 2nd and 3rd, Denise just 9 seconds back.

In the 5k, Carlos Hernandez won in 19:23, with the Albino Sasquatch 2nd and Noe Hernandez 3rd. In the age groups, Andy Mikula won the 30-34, while Leeds Barroll and Lynn Grimes dominated the 65-69. 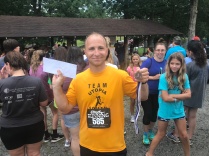 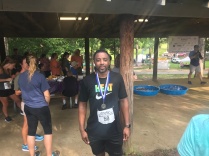