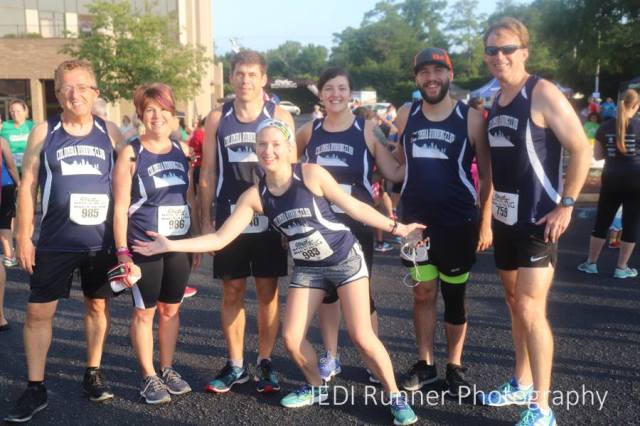 The 811 run 5k is now in its 4th year, and basically serves as a promotion by SCE&G to call their 811 number before you start digging up your yard, lest you decide to break one of their gas or electric lines. Since I’m not fond of electrocution or gas explosions, sounds like a win-win situation to call the number. Also a win is their promotional pricing, only 8 dollars and eleven cents for early bird registration and 18.11 late. Of course, despite being married for 20 years, I am a serious commitment-phobe when it comes to races. It came down to a recent Silent H injury and a beer-fueled plea for his bib that scored me an entry to this race.
The 811 actually started at Saluda Shoals, then transitioned to Rosewood for the last two years. I only ran the race once before, having picked the 811 for my son Alex, since he had to run-train for the Spring Valley swim team. We did couch to 5k. I knew it was an actually, non delusional Selwyn “flat and fast” course, and Blue Shoes Jr threw down a killer kick for a PR in 33 minutes. I was so proud, despite a few cases of 13 year old walksies.
This year we missed out on the training, so I was ready to go solo. Unfortunately there was some construction around the old course in Rosewood, so the 811 would relocate to a new course near Broad River Rd, near the relic of 80’s mall awesomeness, Dutch Square. I meant to check out the course ahead of time but the whole pesky work thing got in the way, so 5k course scouting gave way to stomping out mental illness. Oh well. I did google map it in between patients and became afraid this course would be a total freaking nightmare. But maybe the images distorted the hills? We would see.
With the race time at 8:11 am, a friendly colon, and the site a mere 20 minutes away, I was actually able to make it to the race in a timely manner. Drew Williams showed up early and we were able to get in a full course preview. Dear God. This was going to be brutal. The course starts off harmlessly enough with a big plunge downhill followed by a nasty hill, but then a smooth decline all the way to the 1 mile mark. Second mile was born from the fiery pits of hell since you basically climb most of the way up the far side of a rectangle. Third mile pretty much continues the suckage with the piece de resistance being the reverse of that mile 1 downhill plunge. Good times.
The course was uncertified, though my Garmin came through right at 3.11 miles for my warmup lap. Pretty big crowd, full of CRCers at the start. The entire CRC royal family, aka the Weavers, were on hand with King Rich and Queen Susan, along with princesses Jessie and Kristin. Prince in waiting Ian Loughin was also there, the whole crew in full CRC singlet attire. Also on hand was the Bald Blythewood Beast Alan Deogracias III, aka ADIII. He was looking for an overall win, though would have competition with current Tour de Columbia number 2 Mike Schrum. Power couple Coach O Striggles and Shawanna White were on hand to surely take the masters and women’s wins. Darrell “the code” Brown and longtime Blue Shoe friend/nemesis was back in action after an extended hiatus. Isaac Homer, Whitney/Caroline/Julia Keen, Andrew Ortaglia, Johnathan Kirkwood, Pete Poore, Rocky Soderberg, Leeds Barroll, Micah Simonsen, Arnold Floyd, Brigitte Smith, Andy Mikula, Geary McAlister, Cotes Royson, Ivery Baldwin, Eric Gilfus, Lauren and Seth Lapic, Will Rowan, Mario and Jennifer Tudor, Tammy Carter, Henry Holt, RWB flagbearer Matthew Berube, Ron and Helene Lipe, Sandy Smith, Dina Mauldin, Pete O’ Boyle (pacing grandson), Michael Lambert , Ed Aufuldish, Ginger Catoe and Kerry Stubbs were some of the familiar faces. 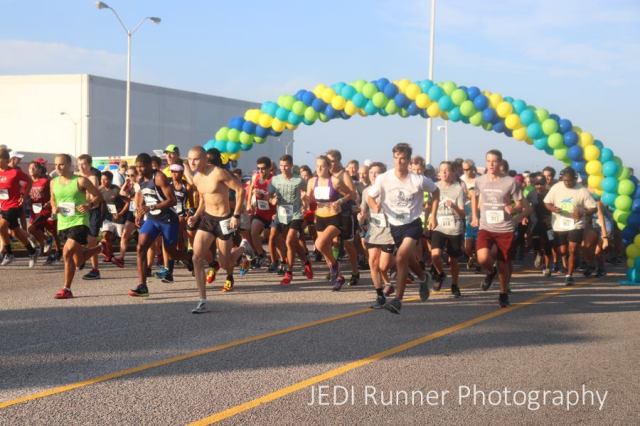 Lining up, I tried not to be a negative nancy but I think I was bemoaning the course the whole time before the start. With the gun, a bunch of people took off like a bat out of hell and immediately slowed down, so I had to do my best old school Barry Sanders impersonation and juked to find a seam to avoid any sasquatch tramplings.
As mentioned earlier, first mile is a total roller coaster, plummeting down then making you climb a big hill halfway, with more freefalling on the other side. I don’t handle downhills well despite my gravitational advantage, aka fatness. The Code and Whitney, who are the two most similar to my 5k times, left me for dead. Even after the big climb, they both have a sizable lead on me, and I start into full on Debbie Downer mode. Like Tyler Mcgaha on a day over 60 degrees, I start internally moaning about the heat and the hills, and whatever else I can think to complain about. I hit the mile mark in about 6:27, which is pretty slow for me given the mostly downhill course to that point. I’m doing ok from a cardio standpoint but legs are hating all the abuse. We descend further, finally bottoming out near the extremely scenic bush river rd/I-26 exit. Then you turn to tackle the monster. Fairhaven drive just sucks. Long, gradual and steady incline for most of the next mile. I’m hating life, but apparently so is everybody else -,especially anyone who took the first mile hard. I finally catch up with Whitney somewhere near the halfway point, but the whole stretch is just a complete slog. But wait, there’s more. There’s a turn onto Gale Dr that parallels I -20 , and manages to ramp up the suck factor further with a relatively short but steep incline that continues even as you turn back towards home on the aptly named morninghill dr.

I’ve drawn a little closer to the Code but he is still thoroughly kicking my ass. Mile 2 rolls by in like 6:30 something, which is to be expected with the mountain climbing. Another decline ensues before we start back on the mile 1 roller coaster. But wait, there’s more. In case you were thinking of running directly back to the start, you get led on a little side loop that throws you down then up again in the span of a quarter mile. Code has just about broken my spirit by this time and I’m already thinking of how he’s going to give me hell about this. But, he’s always complaining about his keto diet giving him no endurance. Not to worry, I’ve got a whole belt of adipose energy to tap into. One last plunge down and you get the joy of reversing that opening freefall, a sharp kinda long slog back up to Dutch Square Blvd. I’m plowing ahead just trying to get this thing over with. But hold the phone…Code is getting reeled back in. But he’s too far away…no wait ..he’s in range. ENGAGE BEAST MODE. With blood in the water, I get a shot of adrenaline and power up the Hercules legs. I’m gasping like a wounded elephant seal but if I have a chance at Blue Shoeing the code its worth blowing up the lungs or donating Honey Bunches of O’s in the process apparently. With a final surge up the hill, I catch Darrell right before the final stretch on Dutch Square blvd. A dark demigorgon living deep within Darrell’s soul yells out at me YOU BETTER F%$#%G RUN!! Oh hell. Mile 3 chimes in at 6:16 and I hit the home stretch like a jackrabbit on cocaine. Form is going all to hell as headless chicken mode is engaged. I keep thinking about how ugly Tracy’s finishing pics are going to look, but hopefully they will have a demonically possessed keto-depleted Code in the background. One last sprint into the parking lot and I manage to get in under 20 in 19:43. 13th overall, technically 3rd in AG with coach O taken out with the overall. I’ll take it for this course, since I figure you’re donating 30-45 seconds to the brutal mountain range.

In the overall, ADIII crushed the field with a 16:40. Mike Schrum was second in 17:12 with Coach O third in 17:27. Shawanna White was the class of the ladies’ field in 18:37 with Liv Paxton 2nd and Melissa Stansbury 3rd. They didn’t do masters – c’mon guys!
In the age groups; Andy Mikula finished 3rd in the 30-34. Drew apparently finished 2nd in AG in the 40-44 behind Mike Kilbourne, whom I’ve never seen run before. Damn these superfit soccer dads. Amanda Lyons was tops in the female 40-44. Whitney keen, Andrew Ortaglia and Johnathan Kirkwood swept the 45-49. Ed Aufuldish was 2nd in the 50-54. Sandy Smith was third in the 55-59. Geary McAlister won the 60-64, with Helene Lipe finishing 2nd among the women. Brigitte Smith won the 65-69, while Leeds Barroll and Pete Poore went 1-2 among the men. In the 70-74, King Rich Weaver won with Michael Lambert 2nd. Arnold Floyd, Rocky Soderberg and Henry Holt swept the 75+

Special thanks to Tracy Tisdale / Jedi Running Photography for all the great pics! 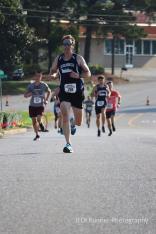 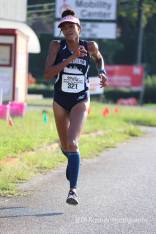 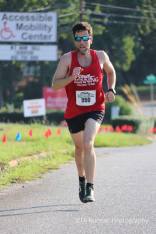 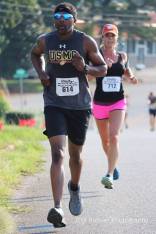